How to cook rib-eye steak to perfection

The rib-eye, sometimes known as scotch fillet or entrecôte, is one of the most popular steaks in the world. It comes from the Longissimus Dorsi muscle, which runs down the spine and doesn’t do too much work, giving it a lovely tender texture. What makes it really stand out, however, is all the wonderful marbled fat running through the meat (including an ‘eye’ of fat in the middle, hence the steak’s name), which when cooked melts and renders into the steak. This provides extra beefy flavour and a juicy, moist and tender texture.

A rib-eye steak can come anywhere from the sixth to the twelfth rib, and which end it comes from should dictate how it should be cooked. The centre cut is the most common (and often what you’ll find when buying rib-eye steak from supermarkets). It contains some of the fat cap along with a nice amount of marbling. Then we have the two ends: short loin and chuck. The short loin end has little to none of the cap and less marbling, which is more suited to people who prefer less fat. The chuck end, however, contains more marbling and has the largest part of the cap attached. To get the most flavour out of a rib-eye, ask your butcher for steaks cut from the chuck end.

You can also get ribeye attached to the bone (rib steak) or the increasingly popular tomahawk steak, which is attached to the whole French-trimmed rib bone (and looks like something a caveman would tuck into).

When buying your steak, look for a nice deep red colour with lots of marbling. Select 2.5–3cm thick steaks that have been aged for maximum flavour. Buying organic and free-range will also result in better quality meat. 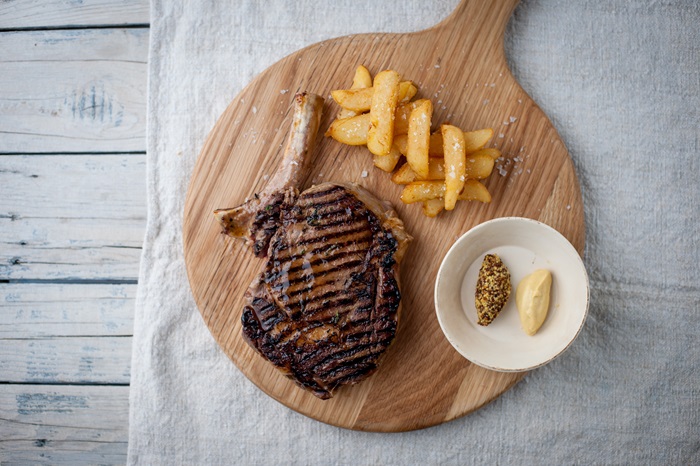 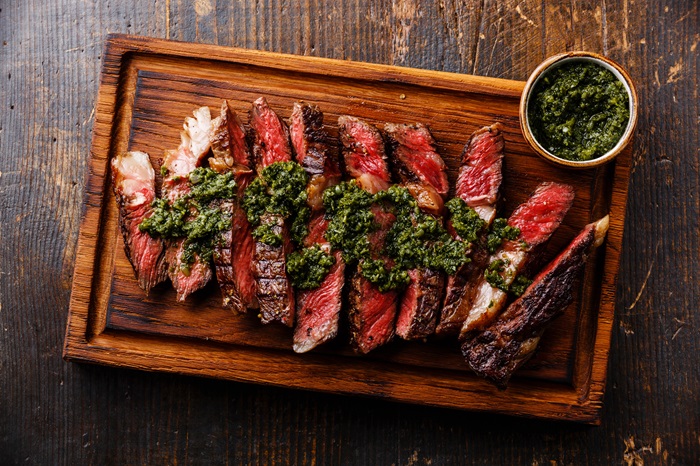 Five of the best steak sauces
by Great British Chefs

How to cook rib-eye steak

This is the classical method of cooking steak and the best way to learn how you like your steak cooked. You can control the heat and adjust if the steak is colouring too quickly, and understand what the steak should feel like at its different stages of doneness. Unlike leaner steaks such as fillet, which can be served very rare, it’s best to cook rib-eye to at least medium-rare, as this gives the fat enough time to render down and flavour the meat.

SHOPPING LIST
1
Remove the steak from the fridge at least half an hour before cooking to allow it to come to room temperature. This is an important step to ensure a consistent cook throughout the steak

When ready to cook, season the steak generously. Sprinkle with plenty of salt and pepper on both sides from a height to get an even coverage

Get your frying pan smoking hot. If you are cooking 2 steaks, make sure your pan is large enough to fit the steaks in with plenty of room– if not, use 2 pans and heat both up simultaneously. Add the steak to the pan and cook on a medium-high heat for 2–3 minutes on each side (depending on thickness and how well-done you like your steak). As a very rough guide, a 3cm-thick steak should be cooked medium-rare after 5 minutes. If you have a meat thermometer, the internal temperature should be 50°C for rare, 60°C for medium and 70°C for well-done
4
After flipping the steak for the first time, add the butter with the thyme and garlic and baste for a minute. To do this, tilt the pan towards you so the butter pools at the bottom of the pan, then spoon the butter back over the steak repeatedly

Remove the steak from the pan and leave to rest for 5 minutes. Don’t be tempted to skip this step as it is an important one – during the cooking process the particles in the meat tighten up, so if you slice into it straight after cooking all the juices will flood out onto the board. Resting time allows the particles to relax and reabsorb their liquids, meaning you don’t lose any of those delicious juices when carving

Slice the steak across the grain, season and serve up with your choice of sides and sauce

Only logged in customers who have purchased this product may leave a review.